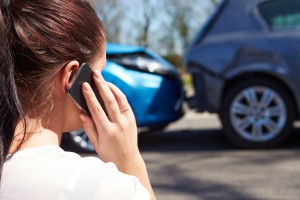 On September 1, 1998, the Intermodal Surface Transportation Efficiency Act of 1991 went into effect. Since then, all cars and light trucks sold in the United States are required to have airbags on both sides of the front seat. According to the U.S. National Highway Traffic Safety Administration (NHTSA), airbags have saved more than 28,000 lives in this country alone. This is certainly good news, however the bad news is that if you’ve been in a wreck that caused the airbags to deploy, then chances are you need auto accident treatment in Richardson. Read on to learn more about airbags.

How Does an Airbag Work?

When a car hits something, it rapidly loses speed. An accelerometer detects this change. If the deceleration is fast enough, then the accelerometer triggers the airbag circuit. (Normal braking can’t cause this.) An electric current passes through a heating element that ignites a chemical explosive. As the explosive burns, a massive amount of nitrogen or argon—both harmless gases—is generated to fill the bag. As the bag expands, it blows off the steering wheel’s plastic cover. The driver, who is still moving forward despite the car’s rapid deceleration, pushes against the bag, causing it to deflate. By the time the car is fully stopped, the bag has deflated.

How Do Airbags Save Lives?

If you’re in a serious car accident, airbags can mean the difference between life and death for you and other passengers. Airbags help protect passengers’ heads from striking rigid objects such as the steering wheel, dashboard or the side of the car. Researchers estimate that head protecting airbags can reduce driver deaths in the event of a side impact crash by up to 40 percent.

Can an Airbag Hurt You?

There’s really only one word to describe airbag deployment: violent. But in fact, it has to be that way in order to protect you. That airbag needs to be in front of you and fully inflated before you collide with something more harmful than the airbag. The average airbag inflates in 20 to 30 milliseconds, or at a speed of 200 miles per hour.

That’s a lot of force, so it is possible to be injured by an airbag. For example, people seated too close to a deploying airbag may sustain burns and other injuries. In addition, failing to wear a seatbelt or having an object between you and the airbag—a lap dog, a water bottle, your cell phone—can lead to serious injury, as well.

Children and small adults are most likely to be injured when an airbag deploys during an accident. A word of caution: rear-facing child safety seats should never be used in the front seat of a car, because an airbag could lead to serious injury or even death if it strikes the back of the car seat.

If you’ve recently been in a car accident—whether a serious collision with airbags or a minor fender bender—then pain management in Richardson can help you get over those aches and pains you may be feeling. Contact a chiropractor today for help.

Dr. Zinovy Chukhman is a chiropractor in Richardson, Texas. He and his team at Align Right Chiropractic offer a variety of services to restore health and wellness, including chiropractic care, massage therapy, nutritional counseling and spinal decompression and rehabilitation. Call AlignRight Chiropractic for an appointment.

A car accident can be a pain in the neck—literally and figuratively. In addition to dealing with the complications of having been in a wreck, you may also be struggling with some leftover aches and pains in your neck, back, shoulders, legs and arms. You may be wondering what is the best course of treatment. Read on to learn when chiropractic adjustment with Dr. Z. is the right auto accident treatment in Richardson.